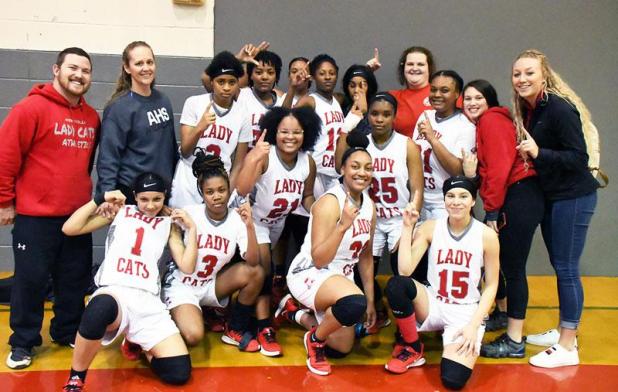 The Abbeville Lady Wildcats celebrate after being declared the outright District 6-3A champs.

The Abbeville Lady Wildcats and the Kaplan Lady Pirates made plans to meet Saturday night to settle who will be declared the outright District 6-3A champs. The plans were made Friday morning before their final regular-season game was played
Their thought was that Kaplan was going to beat Crowley and Abbeville would handle David Thibodaux High, and both teams would finish 8-2 in the district; the Saturday game would’ve broken the tie.
But, like in life, athletics does not go as planned.
On Friday, the Lady Pirates lost on their home court to Crowley, while Abbeville took care of business and beat David Thibodaux.
So by 7:30 p.m. when the game was over, the Lady Wildcats were declared the outright district champions; Crowley and Kaplan finished in a tie for second place with a 7-3 district records.
Because of the internet, half of the spectators in the Abbeville stands and the coaches on the bench, including AHS Head Coach Ashley Boudreaux, knew what was happening at the Kaplan game minute by minute.
Boudreaux was trying to stay focused on the game in front of her and not worry about what was happening in Kaplan.
“I did not pay attention to the Kaplan game,” said Boudreaux. “I was paying attention to the game I was coaching. I had people in my ear telling me what was going on, and I was telling them to stop. I did not want to know.”
But, that did not happen. The Kaplan game went down to the final 18 seconds and when the buzzer went off and Kaplan lost, the word began to spread in the Abbeville gym. When Abbeville’s game ended, two minutes after Kaplan’s game ended, the AHS girls learned that they were outright champions.
“When I heard that Kaplan lost, I was happy for the girls,” said Boudreaux. “They have been working hard.”
The LHSAA will announce the playoff pairings around noon today. The Lady Wildcats will travel in the first round. Abbeville is expected to be the No. 24 or No. 25 ranked team in the Class 3A power standings.
In the win on Friday, a lot of the Lady Wildcats got to play.
JaLearreia Soelv led AHS with 15 points, Chelsea Stewart had 13 points and Zykereya Bell had 11 points for AHS.

The Abbeville Wildcats were only down 56-54 with three minutes left in the game, but then, David Thibodaux High School turned up the switch and outscored Abbeville 10-1 en route to a 66-55 win on Friday.
Zontre Scott led Abbeville with 26 points and teammate Walter Baudoin had 20 points.
Abbeville has one more week to play in the regular season. The Wildcats (8-16) will be at home against the Kaplan Pirates on Tuesday and they will end the season on the road against Erath on Friday.