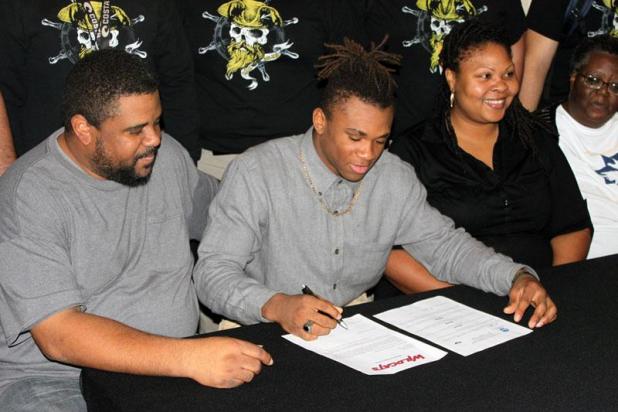 Kaplan’s Julius Johnson signs a letter of intent on Thursday to attend Louisiana College. With him are his parents, Brandon and Marvette Johnson. 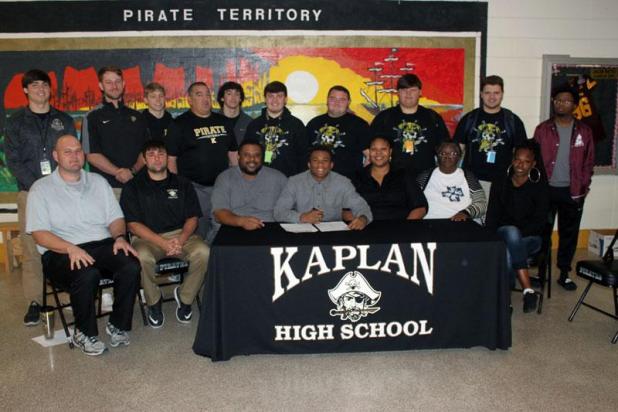 Teammates and coaches join Julius Johnson during his signing.

KAPLAN — Dozens of players from around Acadiana, including seven from Vermilion Parish, signed football scholarships Wednesday on National Signing Day.
Kaplan’s Julius Johnson, arguably one of the best players in the area, went about his day on Wednesday, with no scholarship signed.
That came Thursday morning when Johnson inked his letter of intent to play football for Louisiana College in Pineville.
“I am so happy about this,” Johnson said. “It feels like a weight lifted off my shoulders.”
Johnson could have made the decision to attend LC official on Wednesday’s National Signing Day, the first day players can sign scholarships. He had a good reason for the delay.
“My mom would not have been able to make it,” Johnson said. “I didn’t want her to miss. She has played a big part in this and I wanted her to be here for it.”
Johnson’s parents, Brandon and Marvette Johnson, along with family, coaches and teammates joined him as he signed his scholarship.
“This moment means a lot to me,” Johnson said.
Johnson made nearly every moment count during his past couple of seasons as a Kaplan Pirate. He earned Vermilion Parish Offensive MVP after his junior season. After helping the Pirates reach the semifinals last season, Johnson earned the Vermilion Parish Defensive Player of the Year honor. Johnson said he did not stress about whether he had done enough to catch the eye of college coaches and scouts.
“Football is a big part of my life,” Johnson said. “After God, it’s one of the reasons I get out of bed each morning. If I would not have been given an opportunity like this one (with Louisiana College), I would have worked to make my own opportunity and tried to walk on somewhere.
“If something would have told me that I was done with football, I would have been fine, but I feel like I have a lot of football left in me.”
During the recruiting process, Johnson’s father reassured him that it would only take catching one eye to create an opportunity. Johnson found that with the Louisiana College staff.
“We were just sitting there talking and they asked me if I wanted to play,” Johnson said. “I told them, yes, let’s do it.
“Let’s get this show on the road.”
Johnson, who rarely came of the field at Kaplan, is expected to play on the defensive side at LC.
“I will probably play linebacker or strong safety type,” Johnson said. “I will do whatever they ask me to do. I will be a punter if they ask me to.
“As long I can help out the team, I will do whatever I have to do.”
The school, located in Pineville, near Alexandria, provides Johnson with a great path for his future.
“It’s a great fit for me,” Johnson said of the school. “I know some people there and the campus is awesome. It’s a Christian-based school, and that’s something that can keep me going. That going to play a big part, not only in football, but in me growing up as a young man.”