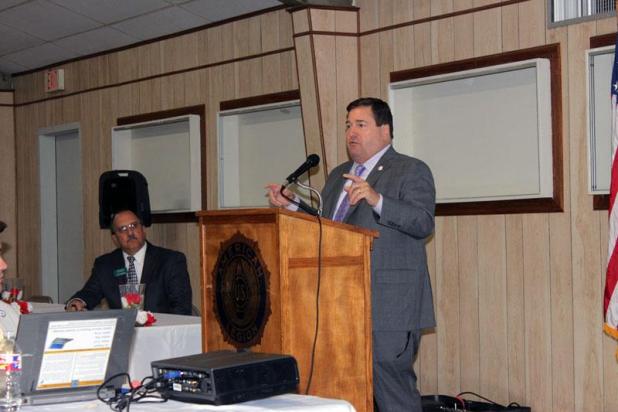 Billy Nungesser knows how much Louisiana has to offer.
As Lieutenant Governor, Nungesser works every day to bring that message to not only the rest of the country, but to the entire world.
Nungesser made a stop Thursday afternoon in Vermilion Parish, a place he said has a tremendous amount to offer to the tourism industry. Nungesser spoke to members of the Vermilion Chamber of Commerce and local officials during the Chamber’s general membership meeting at the American Legion Hall in Abbeville.
“It’s always an honor to be here,” Nungesser said. “I have spent a lot of time here in Abbeville.”
Nungesser recognized members of the Friends of Palmetto Island State Park in attendance on Thursday. The non-profit group works to support Vermilion Parish’s state park.
“They are one of the rock’s that hold our state park system together with their efforts,” Nungesser said. “I promise that I am going to get back out to the park to meet with you all. We have some really great plans for the parks.
“I am really excited about the future of the state parks.”
State parks are one of the many things that bring visitors to Louisiana. And the visitors are definitely coming to the state. In 2016, 47 million visitors came to Louisiana. Those visitors spent $17.5 billion. Numbers for last year have not been finalized, but Nungesser said there was an uptick.
“That is a great economic impact,” Nungesser said, “especially to the small towns around Louisiana. It’s a 41-to-1 return on investment. Just over $1 billion in taxes were left here last year by tourism. That’s a little over $600 per household that you and I don’t have to pay.”
More than 230,000 jobs around that state are related to the tourism industry.
“Last year, 25 percent of all jobs created in Louisiana were connected to the tourism industry,” Nungesser said. “It’s a growing industry and a clean industry. While we may still continue to suffer with oil industry and some other industries, this is an industry that can have a direct impact on every community around the state.”
Tourists traveling to Louisiana are not just doing some form the 49 other states. International tourism continues to benefit Louisiana.
“We had the second largest increase last year of any state,” Nungesser said. “We had a 37-percent increase in international visitors to Louisiana.”
Nungesser said those visitors are great for places like Abbeville.
“Those visitors stay longer, spend more money,” Nungesser said, “and they don’t just come to see New Orleans. They want to see two ore three places while they are here.
“Our job is, when they take that direct flight from London or Germany to New Orleans, that they get out to see all of Louisiana.”
Nungesser acknowledged that budget cuts remain an issue. The office’s budget has gone from $167 million in 2008, to just under $100 million in ‘17. Along with promoting tourism, state libraries are among the responsibilities of the Lieutenant Governor’s Office. With all that the libraries provide so many people, including Internet access, Nungesser said directing any funding from those facilities toward tourism is not an option.
“We have graciously accepted our cuts over the last coupe of years,” Nungesser said. “We are doing more with less and using common sense on how we spend our money.”
Creativity then becomes a key factor. That is where the people who live in Louisiana come into play.
“The job I do is a reflection of your thoughts and ideas on tourism,” Nungesser said. “What can I do to help your community and make a difference?
The Lt. Governor said many of the ideas that have come to fruition since he took office in early 2016 have come from suggestions made by Louisiana citizens.
“I was just lucky enough to be elected Lieutenant Governor and be able to implement them,” Nungesser said.
One direct way people can help spread the word on the state is by becoming Louisiana Ambassador. That can be done by signing up at OnlyLouisiana.com.
“You can sell Louisiana better than anyone,” Nungesser told the Chamber members. “Take a picture of that fishing trip, that festival, or a night out Cajun dancing. You share it with us, and we will share it with the world.”
Nungesser said, as far as he is concerned the people who will be in the photos and videos are the best asset Louisiana has to sell to the rest of the world.
“I recently asked travel agents during a trip to Canada why they send people to Louisiana,” Nungesser said. “Each one of them had a special story about how we treat people. They said nowhere else in the world that they send people, do they come home with stories about how we treat strangers life family. Our greatest asset in Louisiana is you, the people. We make people leave with a warm and fuzzy feeling every time they visit.
“That’s why these tourism numbers keep going up.”