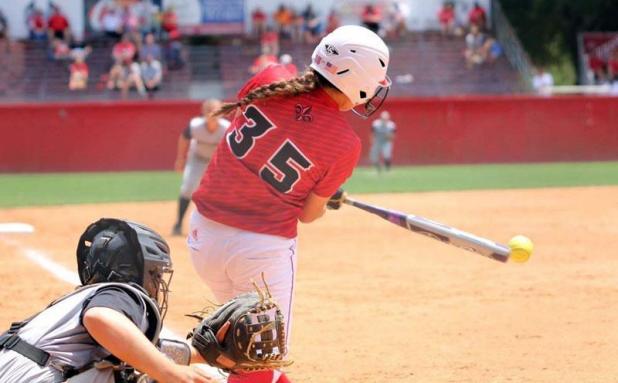 LAFAYETTE – Long before the days to the start of the 2017 season began to dwindle down, the No. 11-ranked Louisiana Ragin’ Cajuns softball team was well-versed with the task laid before them.
A heralded group of sluggers – namely Sara Corbello, Lexie Elkins, Shellie Landry and Kelsey Vincent – was departing after the 2016 season’s final out was recorded. That group powered the nation’s leading home run club two years running.
“This team has worked hard and prepared thoroughly,” Louisiana Ragin’ Cajuns Softball head coach Michael Lotief said. “But now the season will challenge us to establish our own identity and chart a brand new course.”
The Ragin’ Cajuns are figured to transition to a different style of producing results in 2017.
“We may be able to replace the home run production of two of them, but not all four,” Lotief mentioned. “Maybe have a speed kid and a few more slappers in the lineup this year.”
The mission gets underway this weekend as No. 11 Louisiana begins the season with the 31st Annual Louisiana Classics at Lamson Park. Opening Day is set for Friday, Feb. 10 with the Ragin’ Cajuns facing DePaul at 3 p.m. and Iowa State at 5:30 p.m.
On paper the transition may appear daunting. However, several pieces from the 2016 team, which advanced to the program’s fifth consecutive NCAA Super Regional, return – a total of 26 players to be exact.
The core group of returnees in the lineup include career .360-hitter Haley Hayden, home run threats Aleah Craighton and DJ Sanders, who both clubbed 18 home runs last season, and Kara Gremillion, who finished the 2016 season as one of the team’s hottest hitters (hit .457 in May).
There’s also Kelli Martinez, who started the entire 2015 campaign as a freshman and finished last year as the starter in right field, plus Kassidy Zeringue who has proved to be a vital asset defensively and last year worked her way into a starter’s role.
“This core group has been together for three years now,” Lotief remarked. “It’s been fun to watch them grow and develop. Now it’s their turn to lead and pass it on to the next group of youngsters.”
Others who have worked their way through the system and waited for their opportunity will provide added experience. Those include Lexie Comeaux, Jaime Landry and Beth Ashley, who each redshirted their freshman season, as well as Corin Voinché and Taylor Terrio.
“This team has a good mix of experienced players and ‘newbies’,” Lotief mentioned. “There will be new starters who were redshirt players and players who have come up through the system who may have been role players but are now being called on to contribute as starters.”
In the pitching circle, the Ragin’ Cajuns bring back the entire group from last season. 2016 All-American and Sun Belt Conference Pitcher of the Year Alex Stewart (29-6, 1.94 ERA) returns as the team’s lead pitcher for a staff that ranked Top 10 nationally with a 2.06 ERA.
“I think this team will be more suited toward pitching and defense,” Lotief said. “I do not anticipate us scoring all the runs or hitting all the home runs like we’ve done the past couple of seasons.
“We have a deep pitching staff with a lot of experience,” Lotief noted. “We have moved a lot of people around on defense to give us more speed and coverage. It will take us time to gel, but I think this team can be good defensively – and it all starts in the circle.”
Preseason predictions, including a No. 11 national rankings and unanimous choice to claim the Sun Belt Conference crown, might appear to put added pressure in the transition time. Lotief, though, believes his team’s preparation will allow them to rise to the challenge.
“This team has worked as hard as any team I’ve ever been around,” Lotief said. “There’s nothing more this group of kids could have done to get ready. And it’s not just their skill set, they’ve worked hard on team bonding and the mental game.
“We’re going to inspire each other to fight every day,” Lotief stressed. “We’re going to find a way to win, find a way to compete every day. The greater the adversity, or struggle, the more we fight – that’s our pledge to each other and to our fan base.”