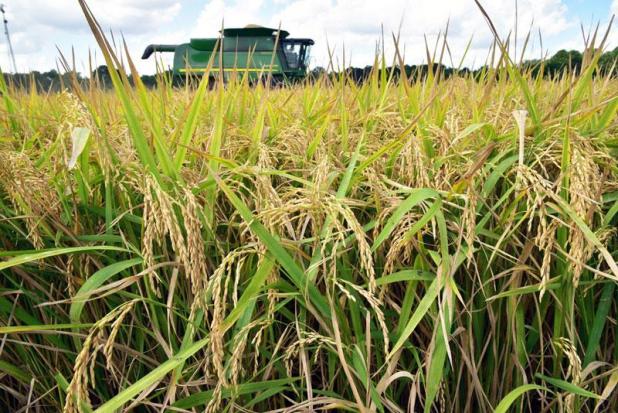 Photo by Bruce Schultz/LSU AgCenter
Rice waits to be harvested by the combine in the background on a field on the Michael Fruge farm near Eunice.

CROWLEY — Farmers probably would like to forget the 2019 rice crop, which has been plagued by low yields.
Bad weather from the start of the growing season through harvest is being blamed.
“Growing conditions have been less than ideal,” said LSU AgCenter rice specialist Dustin Harrell. “We didn’t have good conditions at any one point.”
Harrell estimated yields are off by 15% to 20% from the average harvest.
Yields range from the mid-20 barrel to the mid 60-barrel range, but much of it is between 35 and 43 barrels. “Most of it is below 45,” he said.
The second crop isn’t providing much hope.
“The second crop hasn’t come back as quickly as we thought,” Harrell said. “We’re getting off to a bad start.”
Cloudy days have interfered with sunshine new growth needs.
The crop year started with wet, cool soil conditions, and wet soil complicated applications of herbicides and fertilizer. “Getting fertilizer applied in time and on dry ground is critical to maximize yields,” Harrell said.
Andrew Granger, AgCenter agent in Vermilion Parish, said wet conditions also interfered with herbicide applications.
Low rice prices, currently about $18 a barrel, are also a problem for farmers. “If rice was $25 a barrel, they would be OK,” Granger said.
Hurricane Barry hit in early July, the same time that most rice plants were flowering for pollination. Winds beat up the young plants and caused many of the panicles to have empty hulls. But at least the forecasts of more than 20 inches of rain never developed, Harrell said.
Farmer Christian Richard, of Indian Bayou, said the first part of the harvest was bad with low yields, but yields improved in later-planted fields. “Then the weather quit cooperating, and it started raining every day,” he said.
Richard estimates his yields are down by 15% to 20% from his average.
Richard said he had a truckload of rice rejected by a buyer because of smut, adding that false smut and kernel smut are widespread in his fields. “Our combines are black or yellow, depending on what kind of smut you’ve got,” he said.
Richard said grain quality has been a problem with his crop. “The quality was never good from the beginning. The milling yields are just horrendous,” he said.
Richard is about 70% finished, but he’s trying to locate a set of tracks for a combine to harvest 500 acres of rice in a muddy field that he couldn’t prepare properly earlier this year because the ground never got dry enough to work.
Regrowth on his second-crop fields has been slow, he said.
Rains have continued into harvest, complicating the process. “The harvest has been stop-and-go every day,” Harrell said.
Some rice in Vermilion Parish was a total loss due to flooding after Barry, Granger said, and Vince Deshotel, AgCenter agent in St. Landry Parish, said some rice acreage was ruined by high water.
Excessive heat during night and day in June, combined with continuous rain, especially at flowering, reduced yields by about 10%, Deshotel said.
Later, steady rains kept fields wet and humid. AgCenter plant pathologist Don Groth said the field conditions created the perfect environment for disease.
Fields that normally yield 45 to 55 barrels are only producing in the low 30-barrel range.
Groth said Richard’s problem with smut is not isolated. Smuts and other diseases are being reported throughout the area. Panicle blight and blast disease also have been problems, he said.
Smut spores have produced visible brownish-yellow clouds. “I’ve gotten reports from Texas that they’re having the same problem,” Groth said.
He estimates the harvest throughout south Louisiana is about 70% complete.
Jeremy Hebert, AgCenter agent in Acadia Parish, said many farmers are disappointed this year. “Yields are down more than expected. There have been some disasters,” he said.
Farmers were facing an uphill struggle from the beginning of the growing season.
Some later-planted rice appears to have more potential, and some of rice grown for a second crop looks good, Hebert said.
Jimmy Meaux, AgCenter agent in Jefferson Davis, Calcasieu and Cameron parishes, said about 70% of the fields there have been harvested.
Yields are down by 10% to 15%. “It’s not great. They’re probably in the low 40s or the high 30s,” he said.
Daily rains during harvest are a problem for farmers. “I don’t know if they ever get a full day of cutting,” Meaux said.
Farmer Mike Fruge, of Eunice, said he wrapped up his harvest on Aug. 19. He said his yields were off consistently. Some fields were down from his average by as much as 20% while some were down by only a few percentage points. “It wasn’t as bad as some others I’ve heard,” he said.
He also had a smut problem in the last 400 acres he harvested. But weather complicated harvest. “Our last 200 acres took us double the time it should have taken,” Fruge said.
Rice harvest in northeast Louisiana is about to get started, and Harrell said that crop looks better. “It looks good in northeast Louisiana,” he said. “They don’t seem to have all the issues we had here.”
Keith Collins, AgCenter agent in Richland Parish, said fields are being drained in northeast Louisiana and harvest should be in full swing within two weeks.