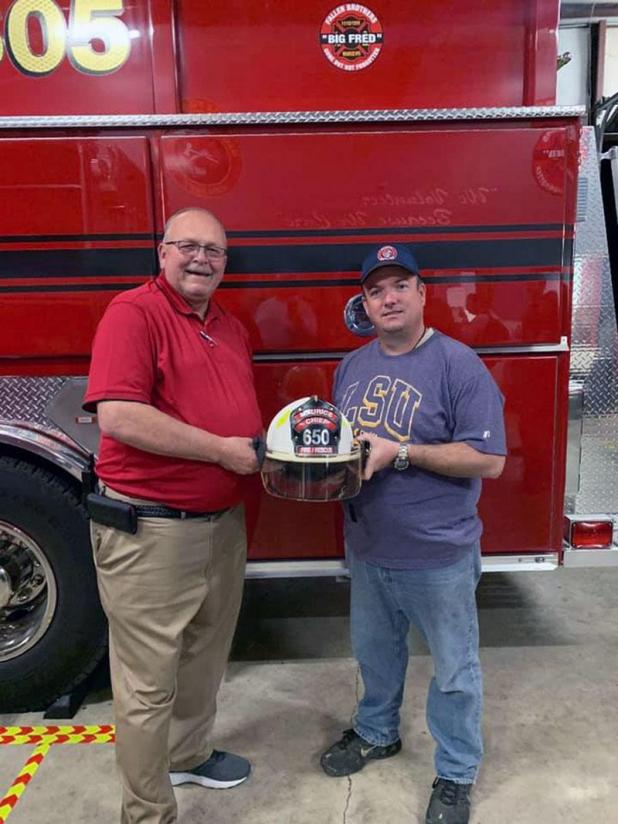 Torch has been passed

MAURICE — For Matthew Trahan, receiving the chief of the Maurice Volunteer Fire Department’s torch came unexpectedly following a tragedy.
Trahan carried that torch proudly for more than 21 years. Now, Trahan is proud to hand that torch to a new leader.
Trahan recently announced his retirement as Maurice fire chief, with David Landry taking the helm.
“There comes a time,” Trahan said, “no matter what you do for a living, that you have to pass that torch.”
While he will no longer be in the leadership role, Trahan wants people to know that he will not be leaving the department.
“The biggest thing that I want people to know,” Trahan said, “is that I am not leaving, and I am not quitting.
“I am going to be around.”
That is part of why Trahan wanted to make a move now.
“I want David to be able to have someone to answer questions,” Trahan said. “As chief, I didn’t have someone to go back to with questions.
“I want that for David, for hopefully the next 30 years.”
Trahan became chief following the untimely death of longtime Chief Henri Fred Broussard on Nov. 18, 1999.
“(Eventually becoming chief) was something I was looking at and thinking about,” said Trahan, who has been with the department for 47 years, “but not that day.”
In his years as Maurice chief, as well as his 17 years as president of the Vermilion Fire Protection Association, Trahan worked to carry on the vision set forth by “Chief Fred.”
“It was a challenge to take over a department that had suffered a gigantic loss in a heartbeat,” Trahan said. “My goal was to continue the vision that Fred had. His vision was greater than we ever realized. The last thing he told me was that we couldn’t quit until we got the politicians to understand that fire services are an integral part of this parish.”
Trahan said a significant part of that came to fruition when the Vermilion Parish Police Jury created a full-time fire coordinator.
“That is a godsend to all the fire chiefs across the parish,” Trahan said.
Maurice is one of the fastest-growing areas in the parish. He said the department had grown as well, and continued growth is vital.
“When we started,” Trahan said of the department, “we had a $39,000 truck and barely a station to put it in. Today, we probably have $1 million in equipment and a six-bay station.
“It’s always about bringing things to the next level.”
Trahan said it is that fantastic growth that also factored in his decision. He said Landry is the right person to lead the department into Maurice’s future.
“I think it’s time to pass the torch for new ideas or a new path with a new person in charge,” Trahan said. “I feel very confident Chief Landry will do an excellent job. The village of Maurice and the surrounding area that we serve is changing drastically.
“I hope the community and the people of the Maurice Volunteer Fire Department back our new chief as well as they have backed me for the last 21 years.”
Trahan recalled receiving an endorsement after he became chief, an endorsement better than any he could have asked for.
“One of the best things that happened to me and my department happened during our first drill after Chief Fred’s death,” Trahan explained. “His wife (Elodie “Lou”) asked to speak to the group. I told her, ‘sure.’ She came in and said thank you for what we all had done for her husband. She had one thing to say before she left. She said that anyone who didn’t back the chief who stepped into her husband’s shoes would hear from her.
“I still remember thinking how strong that was, and that I hoped they would listen to her.”
During Wednesday’s Maurice Board of Aldermen meeting, Trahan listened as Maurice officials thanked him for his service to the community.
“Thank you for what you have done for the village and the people,” Alderwoman Phyllis Johnson said. “I would say it is a loss, but I know you are still going to be there.
“I just want to say thank you.”
Mayor Wayne Theriot offered a special thank you. Trahan’s rise to the rank of chief is woven into loss for Theriot, who is Chief Fred’s son-in-law.
“I want to thank you personally,” Theriot said. “Our family was greatly affected and grateful for you moving in.”
While Trahan is not moving on from the department, the torch of leadership has officially been passed. Trahan is thankful to have held it for the time that he did.
“It was truly an honor to serve you as Fire Chief and build a fire department that protects the community we live in,” Trahan said. “Thanks for your continued support of the Maurice Volunteer Fire Department.”