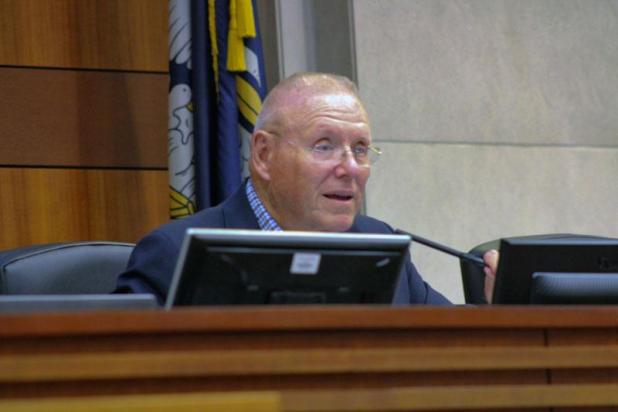 Photo by Madeline Meyer/LSU Manship School News Service
Gary Jones, the president of BESE, listens to supporters of its plan for teacher pay raises and aid to schools.

BATON ROUGE — A state education board defied House leaders Tuesday and refused to back down from its proposal for $39 million in state aid to schools even though that could put a teacher pay raise in jeopardy.
The move sets up the biggest showdown of the legislative session. Gov. John Bel Edwards is backing the Board of Elementary and Secondary Education against House leaders who also support a teacher pay hike but do not want to give local school districts more money.
By law, the board sets the amount of state money to be provided to schools, and the Legislature can only vote that up or down. So if the board does not back down, any raise that the Legislature approves for teachers would be just a one-time stipend and not a permanent part of their paychecks.
Teachers, representatives from education advocacy groups and school superintendents all told the board Tuesday that they were willing to take that risk because the school districts have not had an increase in state aid in a decade.
Deborah Meaux, the president of the Louisiana Association of Educators, which lobbies for K-12 employees, said that BESE’s proposal “is the best plan that can make sure it is sustainable and we are not back here again next year asking for the same money.”
“We don’t want a one-and-done,” she said. “We want to make sure investment in education is ongoing,”
The board also is counting on the Senate, which is generally more receptive to Edwards’ proposals, to help negotiate a better deal.
The Senate Education Committee voted 6-1 in favor of BESE’s plan last Thursday. But Sen. Conrad Appel, R-Metairie, opposed the request and questioned whether enough state revenue is available.
The committee then called on BESE to meet to discuss the matter.
Edwards, the only Democratic governor in the Deep South, is running for re-election, and some Republican legislators are hesitant to give him a victory by approving the education plan.
The Republican-led House Appropriations Committee on Monday advanced its own budget proposal, including a $1,200 pay raise for teachers and $600 for other school workers.
Edwards has proposed giving the teachers an extra $1,000 a year, with $500 more for the support workers.
But the House proposal does not include the $39 million in block grants for the school districts, which Edwards supports.
Gary Jones, the president of BESE, said that the board is pushing hard for the extra money because the state’s finances have stabilized after several years of turmoil.
“This year we are in a different position,” he said. “This year, for the first time in recent memory. There are some funds available, and the question is how those funds will be distributed.”
Donald Songy, the executive policy officer for Edwards, said the governor remains “really confident” that BESE’s plan will be fully funded.
The school superintendents who spoke in favor of BESE’s plan were among roughly 20 superintendents from across the state who attended to show their support.
BESE’s plan, called the Minimum Foundation Program, or MFP, includes $101 million for the teacher pay raise and $39 million for the schools.
BESE included the raise in the plan so that it would become part of the base salary for each school worker.
Rep. Cameron Henry, the chairman of the House Appropriations Committee, noted Monday that while he supported raises to bring teacher salaries closer to the Southern average, the state already spends roughly the regional average per pupil in school costs. Republicans also have said that the state does not scrutinize how local districts spend the grant money.
But even with the support for teachers in the House, any pay raise would just be like a one-time bonus if BESE and the Legislature cannot agree on a broader funding plan.