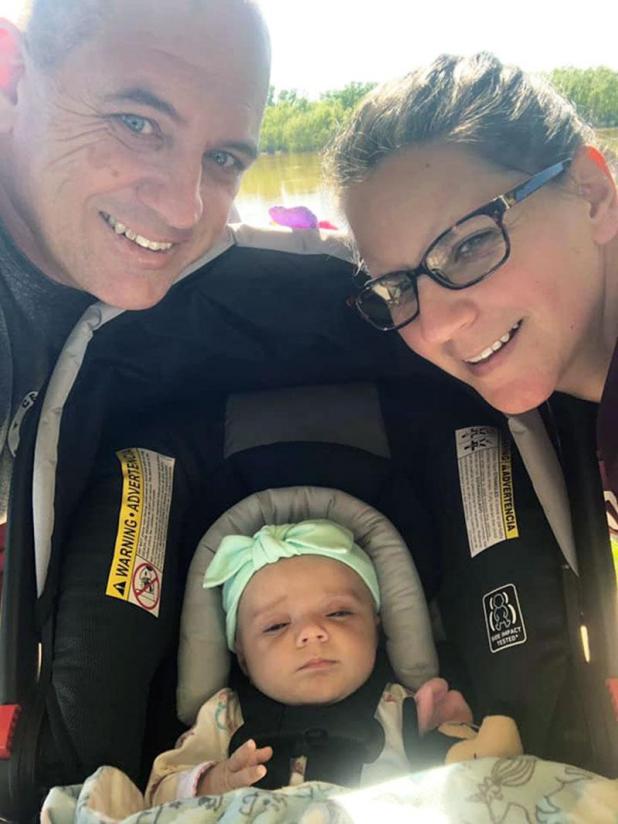 Mark Suire had be quarantined from his family, Ashlyn Grossie and their two-month child, Anlee.

Mark Suire was looking forward to the springtime.
He was beginning his fifth season as the softball coach at Centenary College in Shreveport, and he became the proud father of a two-month-old baby. But then the coronavirus pandemic arrived and turned his life upside down.
Softball season was canceled, which turned into a positive thing because it meant more time to spend with his daughter, Anlee, and his girlfriend Ashlyn Grossie, who is from Delcambre. The three had time to bond until one morning when Suire awoke to feel sick.
Two weeks ago, Suire, who is 50, awoke with sore eyes and a mild fever. He first thought it was Pink Eye. But after sleeping for 36 straight hours, he figured it was more than Pink Eye.
With a two-month-old in the house, Ashlyn and Suire did not want to gamble, so Suire got tested for COVID-19, especially after his fever spiked to 102.8. That test came back negative.
Days later, he took another COVID-19 test, and this time it came back positive. Suire, who is a native of Abbeville, became a statistic. He also had to stay away from his baby in their two-bedroom home.
“Originally, they told me to go away,” said Suire. “I had nowhere to go. I had to go into quarantine in my own house.”
He stayed away from his family and slowly recovered over seven days. He contacted his players and the university and told them about his situation. Telling his players in a conference call was tough because he was the first person they knew with COVID-19.
“They wanted to know what was next,” said Suire. “They wanted to know if I would die. At the time, I did not feel that bad. My lungs were fine. I was not having trouble breathing. I just had a fever and felt sluggish.”
He said Grossie became a cleaning machine and wiped everything throughout the house, in hopes of killing the virus.
When Louisiana was forced to go into lockdown, Suire and his family stayed home for the first two weeks. He said the only place where he may have come in contact with the virus is when he went to the grocery store in Shreveport. Other than that, he went nowhere.
Today, he has recovered, but he knows he is not out of the woods. While he was able to hold his baby this week, he is still careful when he is near Ashlyn and Anlee. If the three go outside for a walk, he will wear a mask if there are people around. He is staying away from crowds. He washes his hands throughout the day.
Suire admits he is not the same person he was before the virus. Coach Suire only worried about softball, winning, losing, and when to hold the next practice.
“Now it is, will I survive today?” said Suire. “You turn on the TV, and you see the cases of people dying. I was scared to death to go to the hospital. I knew I did not want to go.”
He never did. His body was able to fight off the virus. Since that morning of waking up with sore eyes, Suire has lost 20 pounds because he has eaten very little. His life is slowly getting back to normal, but his body is still not 100 percent.
“Each day I feel better,” he said. “I am slowly recovering, which I am grateful for.”
He said he is also grateful to Ashlyn and Anlee for helping him survive the virus.
“I could not have done it without them,” he added.