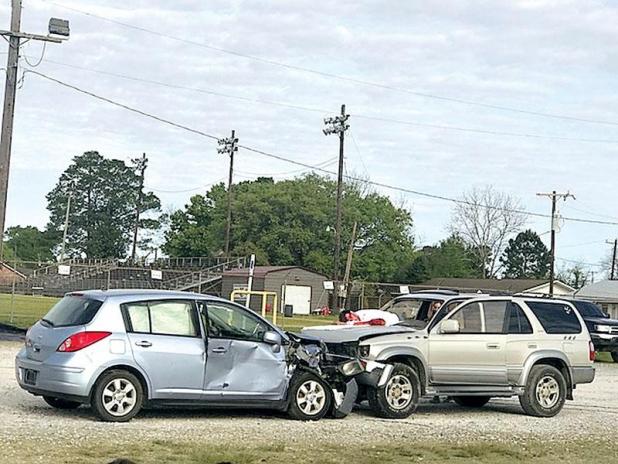 According to Mothers Against Drunk Driving, every 90 seconds someone is injured in a drunk driving crash.
Vermilion Catholic High School students participated in a mock crash to educate their fellow students about the dangers of driving drunk.
Staging such a crime could be difficult, but with the help of Acadian Ambulance, Abbeville Fire Department, Abbeville Police, and several other departments, made it much easier to spread the grisly visual of the effects of driving drunk. University Medical Center of New Orleans and the Louisiana Highway Safety Commission were instrumental in bringing the program to VC.
A mock crash is when educators around the country are intent on making these statistics real for teens. And in this day in age, it’s becoming more and more frequent. Friends are losing friends, dads are losing sons, moms are losing daughters, and the list goes on.
According to MADD, just over half of the children killed in drunk driving crashes were in the car with the drunk driver, but the other 46 percent of victims were in the car who got hit. During the mock crash, police officers will give chilling accounts of what it is like to tell a family that one of their loved ones has died as a result of a drunk driving crash.
“I think it is necessary because I feel like the kids always feel as if they’re invincible,” VC teacher Katie Landry said. “It gives them a reason to look and realize it could very well be any of them. Its very difficult to watch, but I feel like it needs to be seen.
“If this could save just one single life, then it was all worth it.”
The nurses used fake blood to show how gruesome it could be. JR Bazar, a student, painted red while laying on the hood of the SUV from being partially ejected from not wearing a seatbelt, was the student whose life was ‘taken’ in this mock crash. The driver, Monique Domingue, frantically searching for her phone, and shaking the previously mentioned victim to get him to open his eyes, played the drunk driver.
In another vehicle, a set of friends were hit by this impaired driver, who crossed the center line. Jean Paul LeMaire, the sober driver had minor scrapes and bruises, but his passenger, Camille Harrington, was injured. Both of her legs pinned under the dashboard with no way to get out.
The students in the audience were in shock, some with tears in their eyes. One student saying, “I didn’t think it would look and seem so real.”
Bazar, the only fatality in this crash, explained why he wanted to be a part of the mock crash.
“Thinking about doing it made me realize I needed to do it,” Bazar said. “This could be real, this could be me and my friends, people that I know. It tore my mom up to watch my lifeless body on the hood of that car, and I guess reality set in that it could happen, that why she broke down when the officer told her I had died. It wasn’t her acting, it was real.
“My dad died a couple of years ago and I think it hurt her because it could be me she loses, too.”