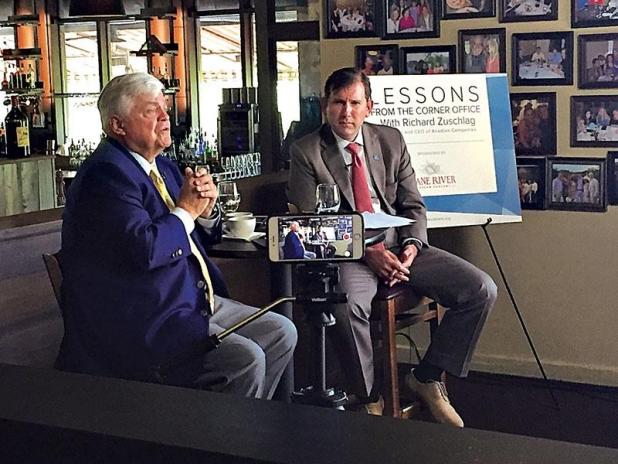 Jason El Koubi (right) listens as Acadian Ambulance Chairman and CEO Richard Zuschlag tells the story of how he started and grew his business. The discussion was part of One Acadiana’s Lessons from the Corner Office series.

What can be learned from the corner office?
For those who have attended One Acadiana’s Lessons from the Corner Office series, the answer is plenty.
One Acadiana, formerly the Greater Lafayette Chamber of Commerce, has held events this year that bring business leaders from the area together with its members and investors.
Richard Zuschlag, Chairman and CEO of Acadian Companies, joined the conversation Friday morning, giving One Acadiana members some insight into what it took to create one of the most successful companies in the region’s history.
“The success of Acadian Ambulance,” Zuschlag said, “is a direct tribute to the people of Acadiana. We have employees that have loyalty and dedication. There’s probably not any other place in the country where you can start a company like we did, and have the kind of loyalty, goodwill and hard work that our Cajun family has provided.
“Our company has been successful because of our employees and I am very proud of that.”
A native of Pennsylvania, Zuschlag, after working briefly in Washington, D.C., found his way to Lafayette in 1970, while in his early 20s. He worked with hospitals in Lafayette through a government program, aimed at helping unemployed people earn their high school equivalency and find jobs at the hospital as nurses aids, housekeepers, janitors, etc.
“At the end of that assignment I fell in love with Lafayette,” Zuschlag said. “I looked for a business that I could get into to stay.”
With his connection to the hospitals, Zuschlag learned of the need for a new ambulance service in Lafayette. Leaders in the city initially said youth worked against Zuschlag and his associates.
“They said we were just too young,” Zuschlag said.
After being told no on three separate occasions, Zuschlag worked to convince Lafayette leaders, including sitting outside of Lafayette Mayor Ray Bertrand’s office for five hours. In the end, Zuschlag prevailed.
“Persistence prevailed for me,” Zuschlag told the One Acadiana members. “Persistence got me through.”
Zuschlag started the company with $2,300. The company financed two ambulances at 16 percent to get started, after no banks would offer financing. The company hired eight Vietnam medics.
The company has grown exponentially in nearly 50 years and is now worth millions. Zuschlag stressed that all those years ago, there was simply one goal, one that helped the company grow to what it has become.
“I think one of the reasons that we have been successful,” Zuschlag said, “is that we were in this business to save lives. The money making came later.”
Zuschlag reiterated to those in attendance Friday that Acadiana, through multiple ways, has always been good to his company.
“It has provided us great employees and everyone has always been good to us,” Zuschlag said. “Acadiana was good. Again, I would say it would be difficult to start a business like this in other parts of the country.
“We were in the right place at the right time with a little bit of luck.”
For One Acadiana President and CEO Jason El Koubi, Zuschlag’s story is one of many that shows what Acadiana can do to help businesses thrive. Lessons from the Corner Office brings those stories to members of One Acadiana.
“This series is something we created because there are some extraordinary leaders involved with One Acadiana who care passionately about their community and this region,” El Koubi said. “Through the work that we do, as a business association, we get to understand the intelligence, passion and commitment that these extraordinary individuals have.
“We want to share that with a wider audience.”
Along with Zuschlag’s turn on Friday, One Acadiana has hosted Tabasco President and CEO Tony Simmons and Iberia Bank Executive Vice President Jerry Vascocu. Lenny Lemoine, president and CEO of the Lemoine Company, is expected to speak for the series in September.
“Through the format of this event,” El Koubi said, “you have a very candid and enlightening conversation with some of Acadiana’s most significant and interesting personalities.
“This is an opportunity to get to know our business leaders better, to under stand their stories and learn from the important work that they have done.”