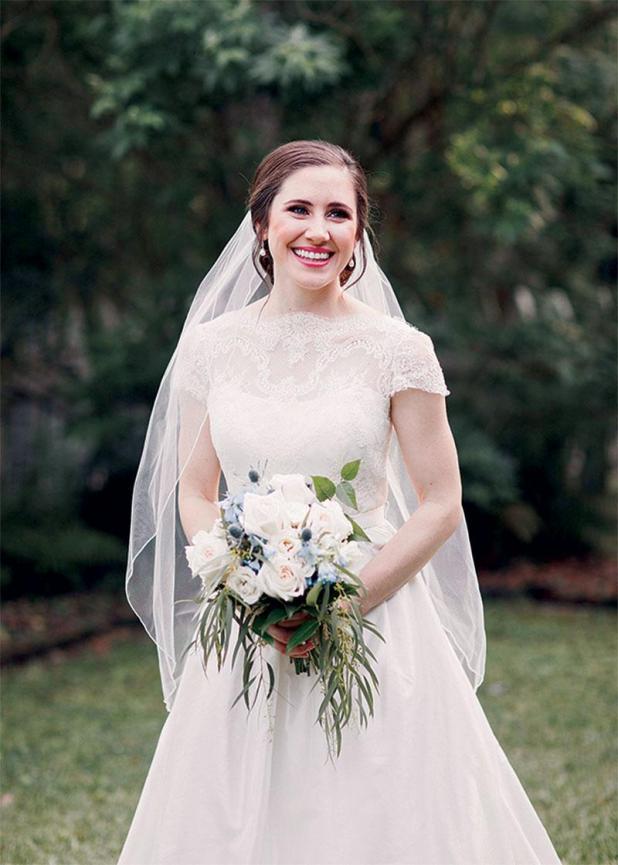 Madeline Guidry of Lafayette and Christopher Meche of Lafayette were united in marriage during a ceremony that was held on Saturday, June 1, 2019 at St. Mary Magdalen Catholic Church in Abbeville that was adorned with Easter lillies on grapevine crosses on the exterior doors and the interior decorated with pew sashes and large, white hydrangeas tied with satin ribbon.
Father James Brady officiated the 6:30 p.m. ceremony.
The bride is the daughter of Dawn and Gary Guidry of Lafayette. Her grandparents are Betty Theall of Abbeville and the late Lawrence Duhon of New Iberia, Matsy Guidry and the late Ernie Guidry of Abbeville and Joselyn Duhon of Lafayette.
Giving the bride away was her father, Gary Guidry. The bride wore a Tara Keely by Lazaro bridal gown - Ivory silk shantung bridal ball gown, with an Alencon lace illusion bateau neckline, cap sleeves and deep V-back, ribbon sash at natural waist with a bow accenting the back and a full gathered skirt with a sweep train. The bride also wore a borrowed fingertip length veil made of simple ivory tulle.
The bride carried an organically designed bouquet of greenery with white and light blue blooms such as garden roses, delphinium, ranunculus, spray roses, thistle, seeded eucalyptus and camellia with its’ handle wrapped in white satin ribbon.
The groom is the son of Liz and Bret Meche of Opelousas. His grandparents are the late Emile and Verdine Meche of Opelousas and the late Richard and Isabelle Lacombe of Opelousas.
Mallory Gunn, best friend of the bride served as maid of honor. Bridesmaids included Jeannine Goldsmith, sister of the bride, Camille Arsement, sister of the bride, Kalyn Akers, sister of the bride, Emily Meche, sister of the groom, Anna Dartez, cousin of the bride, Liz Ivy, friend of the bride and Caki Burch, friend of the bride. Genevieve Akers, goddaughter of the bride, daughter of Kalyn and Kory Akers, served as flower girl.
The bridesmaids wore a pale blue floor length dress made of chiffon with an a-line, empire silhouette, cowl neck with tie at the waist and a ruffle cascading down the mock wrap skirt. Bridesmaids carried a nosegay bouquet of greenery with white and light blue blooms such as garden roses, delphinium, ranunculus, spray roses, thistle, seeding eucalyptus and camellia with handles wrapped in white satin ribbon. The flower girl wore a handmade white dress with detail smocking across the bodice, a collared neckline, cap sleeves and a full skirt. The back of the dress had buttons and a long sash to finish in a bow. A hair clip, made with four beautiful white roses and greenery was also worn. She carried a bouquet of white sweetheart roses wrapped in silk baby blue ribbon.
Aaron Meche, brother of the groom, attended as best man. Groomsmen included Craig Guidry, brother of the bride, Stephan Guidry, brother of the bride, William Pitre, friend of the groom, Logan Quebedeaux, friend of the groom, Nicholas Artall, friend of the groom, Daniel Waldron, friend of the groom and Tyler Stevens, friend of the groom.
The ring bearer was Thomas Arsement, godson of the bride who is the son of Camille and Jared Arsement. He wore navy cotton sateen suspender shorts over a white peter pan collared shirt with navy and white saddle oxfords and knee-high socks.
Myles Gates, friend of the groom and Jon Goldsmith, brother in law of the bride served as ushers.
Ceremony music performed by Tommy Guidry, organist. The bride and her attendants advanced to Trumpet Voluntary by Clark, Trumpet Tune in D Major by Purcell played for the recessional.
Vocalist for the ceremony was Jenifer Melancon, and Violinist Emil Ivanov. As guests arrived and took their seats, God in the Planning, Jesu, Joy of Man’s Desiring, Vangelis: Hymne played as preludes. Mother’s Procession was Meditation de Thais, Attendants Procession was Canon in D, Responsorial Psalm was “May the Lord Bless us all the days of our lives” (Psalm 127/128) by Chepponis. Gospel Acclamation was Celtic Alleluia by Walker, Meditation after vows selection was Gift of Love arranged by Hal Hopson with a Presentation of flowers selection of Ave Maria by Schubert.
A reception, was held at Magdalen Place with food by Bon Temps Grill and music by GTO Party Band. Each table was dressed in ivory with centerpieces of Delft with gorgeous white hydrangeas accompanied with greenery of eucalyptus, ruscus, pittosporum, magnolia, and lily grass. Exterior entrance was lighted with glass lanterns with ribbon and greenery. Large, wooden candelabras with candlelights softly illuminated the ballroom as well as a ceiling swag of Edison lights. Special tables of photos and photo books featured their courtship and also close relatives who have passed.
At the reception, the bride and groom danced their first dance to “Our Love” by Judah and the Lion. The bride danced with her father to an original song entitled “Bouquet of Love”, written and recorded by her father. The groom and his mother danced to “Your Song” by Elton John.
The bride’s cake was a 3-tiered white cake topped with florals and amaretto-walnut filling by Heidi Broussard.
The groom’s cake was a German Chocolate golf-themed cake and baseball cake balls.
Upon their return from a wedding trip to Italy after visiting Rome and the Amalfi Coast, the couple will reside in Lafayette, Louisiana.
A rehearsal dinner, hosted by parents of the groom, took place at Riverfront Banquet Room on Friday, May 31, 2019.
The bride is a 2010 graduate of Vermilion Catholic High School in Abbeville, Louisiana and a 2015 graduate of the University of Louisiana at Lafayette with a Bachelor of Science Degree in Elementary Education. She is employed as a Private Childcare Specialist.
The groom is a 2010 graduate of Opelousas Catholic High School in Opelousas, Louisiana and a 2015 graduate of the University of Louisiana at Lafayette with a Bachelor’s of Science Degree in Business Administration and Minor in Accounting.